First Italian Multiplier Event: perspectives on the futures of education

The first Italian INCLUDE Multiplier Event, initially planned as a participatory conference with panel discussions in May 2020, took place online due to the COVID-19 pandemics.

The event was entitled “Officina 2020: Education and Futures”, to give a sense of continuity with previous initiatives – the “Officine” - that the research group Social Studies of Science, Education, Communication of the Institute for Research on Population and Social Policies of the National Research Council of Italy – CNR-IRPPS organizes annually together with the Italian Ministry of Education to promote a reflection on strategic issues of education and educational policies. Instead, the introduction of the word “futures” in the title is due to a partnership with the “Futures of Education” initiative developed by UNESCO, expanding the temporal perspective up until 2050.

The goal of the INCLUDE first Multiplier Event was to foster the participation of stakeholders and school communities in a process of exchange of experience and co-creation of knowledge since the early stage of the project, enhancing a debate on the INCLUDE approach to CLIL in developing key competences – with particular reference to citizenship competences - and in rethinking, in the short and long term, the issues of europeanity and planetarity to promote environmental, social and economic sustainability.

Given the COVID-19 emergency situation, the role of Information and Communication Technologies and virtual schooling was considered as central, too.

The Officina 2020 consisted of panel discussions - “virtual tables” – on these issues and, more widely, on the aims of education and competences, considering the dimensions of uncertainty linked both to the fragility, complexity and interconnection of each element of our planet - which can arise in crises and emergencies - and to the peculiarity of “post-normal” knowledge, characterized by uncertain facts, values called into question, high interests at stake and the urgency of the decisions to be made.

The virtual tables took place on April 28, May 5 and 8, involving a total of about 40 participants as selected panellists, plus 4 CNR researchers as coordinators and facilitators: the first table was composed by 14 students from the secondary school students of the Provincial Council of Rome; the second table by 6 researchers, 1 teacher, 2 school directors, 1 policymaker from the Italian Ministry of Education, 1 student; the third table by 3 policymakers, 3 researchers, 4 teachers, 3 from NGOs, 1 from the Goethe Institut.

A fourth virtual table, on May 13, was added to promote a connection with another European Erasmus + project, the Global Science Opera leverage students participation and engagement in science through art practices (GSO4SCHOOL), giving value to the issue of integrating science and art in the educational field to develop scientific citizenship.

The participatory process started before the virtual meetings, collecting panellists’ tacit knowledge in terms of first reflections and keywords, that were shared among the participants, and ended after the meetings, with their contribution in the reports collecting the virtual table results.

Moreover, the virtual tables were transmitted via streaming and, for the public, it was possible to send contributions that were taken into account in the summary of the results as well.

Considering the need of working at a distance and, at the same time, reaching a wider public, a proper website was developed for the Officina 2020 (https://www.officinaeducazionefuturi.it/en/), with the aim of gaining visibility and involving scientific and educational communities.

The website, which embeds a link to the INCLUDE website, was conceived as a virtual space to promote debate and exchange of experiences also after the end of the event. It represents an interactive space for the INCLUDE Italian community, fostering connections with the wider communities linked to the CNR “Officine” initiatives. Through the website, a wider public could, and can, have access to shared documentation, the virtual table recordings and final reports, but also actively contribute, sending materials and reflections to be shared.

Besides being available on the Officina 2020 website, the reports collecting the virtual table results have also been acquired by the UNESCO Futures of Education initiative and by the wide “Officine” network via mail.

First INCLUDE Multiplier Event in Greece

After a brief introduction of the INCLUDE project, crucial aspects of the project were discussed, namely the design of educational scenarios, CLIL implementation, aspects of Europeanity, enhancement of the educational material by using non textual resources (multimodality), transversal skills and how to promote them through specific scenarios. The participation of the British council was crucial in the event as it provided insights of the international experience of CLIL implementation, as well as similarities with other projects being currently implemented.

In total, 55 teachers and other stakeholders participated in the event. 17 of the participants  were members of the staff of the organizing institutions and 38 were external. The majority of them were teachers (27 out of 38) but there were also Education policy makers (5 out of 38), researchers (5 out of 38) and one member of the Staff of the British Council. 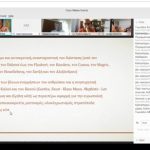 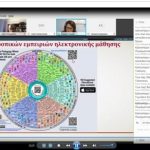 First Multiplier Event in Romania: CLIL – between theory and practice

The first Multiplier Event in Craiova was organized on-line on the 27th of May 2020 by Mircea Eliade Secondary School, involving various local stakeholders.

Among the participants, there were two university professors from the University of Craiova, specialised in education sciences, two inspectors from Dolj County Inspectorate, two guests from Craiova Prefecture and the City Council. We also had one guest from our local county library - Alexandru and Aristia Aman Dolj County Library, as well as teachers from other major cities in Romania. Students of different ages took part in the event, from both secondary school and B.A. university level.

The event was structured in three sections.

Section 1: After the welcome address given by Mircea Eliade School’s Principal, Genoveva Ioana, followed a brief presentation of the project by the coordinator Lidia Cazacu, there were two keynote speeches delivered by Prof. Titela Vilceanu, PhD and Lecturer Alexandru Strunga, PhD from the University of Craiova. The representative from the Prefecture, Marina Andronache, offered a speech on Europeanity and European Projects, while the delegate of the School Inspectorate, Ani Draghici, talked about learning strategies that support CLIL. Mrs Madalina Bailesteanu from the Alexandru and Aristia Aman Dolj County Library presented a wide range of materials that the library can provide for teachers to design the scenarios.

Section 2: There were four breakout rooms in which the INCLUDE scenarios, designed by Mircea Eliade teachers, were presented: Every drop counts, EU-ID Card, I am a child, I have rights, Neoclassicism in ar-kid-tecture, Water - importance, uses and protection measures.

Section 3: There were open discussions on the scenarios with feedback and suggestions.

It is possible to watch the video recording of the event (in Romanian language) here.

The event was actually planned to be held in June 2020; due to the current COVID-19 pandemic situation it was postponed and rescheduled to Friday, 20 November 2020, taking place online. The event was titled “The INCLUDE project: New Horizons in Education”, aiming to introduce secondary teachers to information about as well as skills and techniques used in the INCLUDE project, ultimately in order to transfer them to their schools. As its name suggests, INCLUDE (Integrated Content and Language via a Unified Digital Environment), the project’s nature and value in education today are crucial, especially with the current pandemic situation all around the globe. If such projects were already applied in education during the crisis, the educational situations would have been much better and remote education sector would not have encountered as many problems as it does today.
There were five presentations. Mohammed Shormani of the University of Cyprus talked about how INCLUDE was motivated and initiated, shedding light on INCLUDE’s nature, its partner countries, mission and objectives. He also talked about INCLUDE’s four phases, activities, deliverables, intellectual outputs, educational scenarios, quantitative and qualitative indicators, INCLUDE work plan.

The second presentation, delivered by Claudia Pennacchiotti of the National Research Council of Italy, focused about the competences in the INCLUDE approach and how competences have become a substantial part of the curricula today. She also talked about how skills and competences are incorporated in the INCLUDE approach, especially in INCLUDE scenarios, focusing mainly on digital, citizenship, multilingual, personal, social, learning to learn and cultural awareness competences, and more importantly how these competences could be promoted in school education.

The third presentation was delivered by Phoevos Panagiotidis of the University of Cyprus on CLIL as the basic ground of INCLUDE. After introducing CLIL as a valuable approach to teaching and learning, in which both a subject matter and a non-native language are taught in an integrated manner, Panagiotidis focused on CLIL objectives, CLIL 4Cs, CLIL conceptual framework, CLIL benefits, recent development in CLIL and evaluation in CLIL. He then talked about how INCLUDE incorporates CLIL, by also adding a fifth C^2, which is cooperation and re-creation, and by integrating novel concepts and skills such as “Europeanity”, and transversal skills and competences.

The fourth presentation was delivered by Cleopatra Kalogerakou of the 1st Experimental High School of Athens on a Model INCLUDE scenario, presenting a scenario entitled “Tourism in Europe” detailing the model’s components, characteristics, activities, drills. She also showed how the scenario was created, and how the four basic components - multimodality, Europeanity, transversal skills and key competences - were employed and promoted in this model scenario. She addressed teaching periods, activities and the time allotted to each activity, and explained how scenarios are enhanced with examples and links to external sources.

The final presentation was delivered by Shormani on the role of the University of Cyprus in INCLUDE, focusing on the work done up to now in the project’s ongoing development. He discussed works that the University of Cyprus has contributed, such as outlining the elements to be evaluated, including the linguistic and non-linguistic elements. The former include grammar pragmatics and vocabulary, and the latter include content, competences, culture, cognition, communication, community, creativity, autonomous learning.